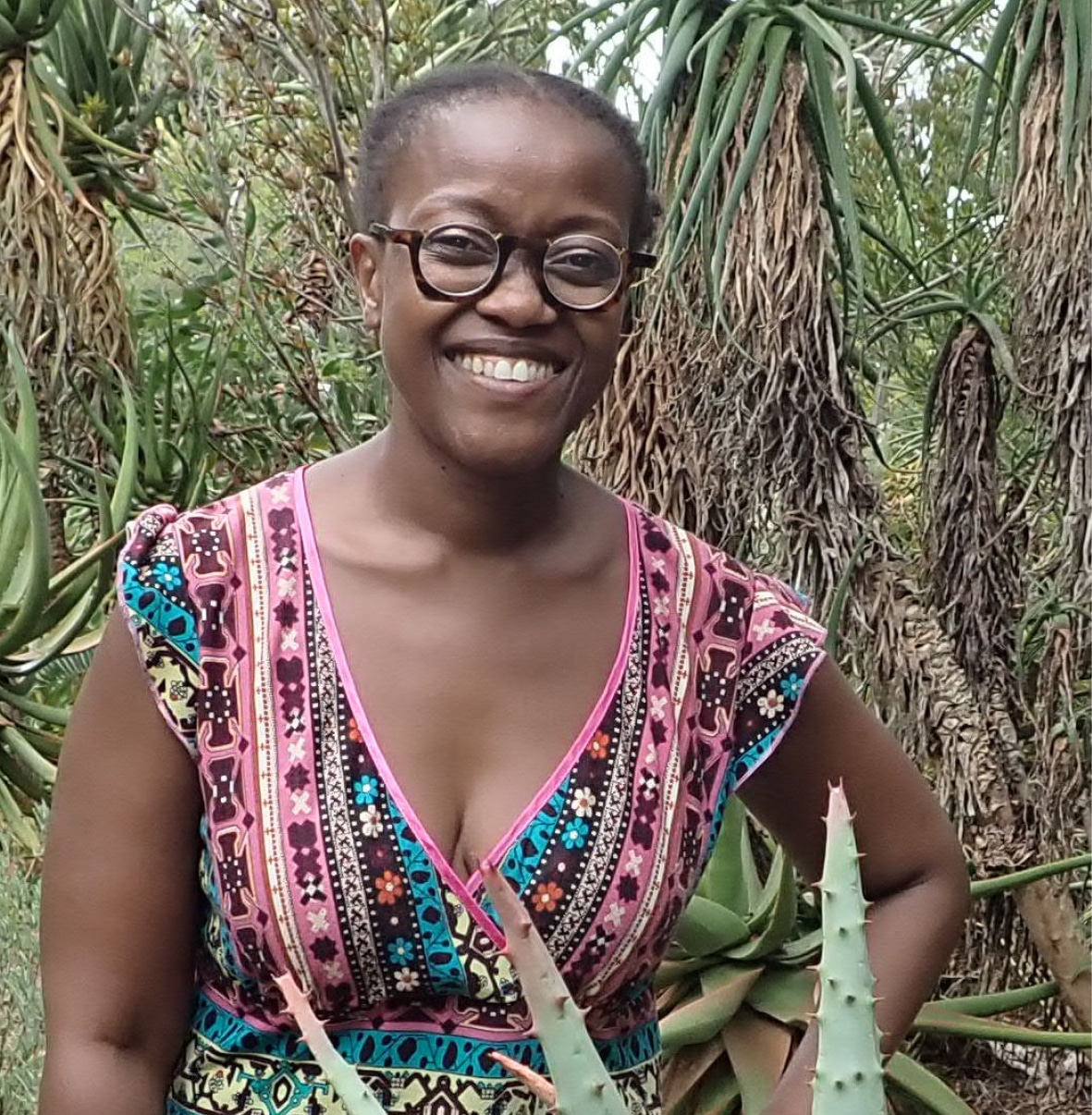 Professor in the Department of Botany and Zoology, Stellenbosch University

Nokwanda ‘Nox’ Makunga obtained her doctorate in 2004, joined Stellenbosch University in 2005, and is presently an associate professor at the institution. Today she is a leading researcher on South Africa’s medicinal plants. Using biotechnology, phytochemistry, and genetics, she studies the interactions between humans and plants. She couples this with investigating opportunities for socio-economic development, and has received numerous awards for her research. She is also passionate about teaching the public about science.

I come from a small town called Alice, in the Eastern Cape. I attended school in Grahamstown, where I picked up my nickname. My father worked at the University of Fort Hare as a botanist. I studied a BSc at the University of KwaZulu-Natal, in Pietermaritzburg, where I ultimately also completed a PhD. Following in my father’s footsteps, I, too, am a botanist, specialising in plant biochemistry and molecular biology, with a focus on medicinal plant science.

I don’t know if I would call them challenges per se, maybe just a few issues, mainly in relation to being a woman scientist and, in a short period, many changes in my life. You don’t see many people who look like me doing what I do.

I moved from Pietermaritzburg, where I’d spent my entire university life in a very close-knit group of people from all over the world, to Stellenbosch University in 2005, which changed everything I had built over the last ten years. I was the only black woman scientist in the Faculty of Science, and I had no friends, not even people I knew. For me, this was a totally new space, a new department, and I didn’t understand some of the cultural aspects. I had never taught the class before and didn’t know the group of students. Everything was new, and this was challenging.

It was also an Afrikaans environment, whereas I had lived in an English town and attended an English school. The last time I’d heard Afrikaans was when I was in matric, writing my final exams. I had to get to know the university and the town, and I had to try to make friends. Settling into this new environment took me a lot longer than I thought it would, despite being a really social and outgoing person.

Once I started to settle in at Stellenbosch, I made a decision. I knew I needed to be here because, sometimes, I would walk around on campus and not see a single person who looked like me. I knew that, to make the place accommodating of black women, I needed to stick it out and make this place home for me and, hopefully, make it home for others. I believe you need role models, and I believe in inspiring others. It also helps to have someone off whom you can bounce issues, people who are like-minded.

I would say, ‘Be you.’ It’s very simple. You cannot be somebody else. You’ve got to do you. You also need to find your own voice and your own approaches to navigating a space that is sometimes not easy to live within.

Also, you need to understand your passions and the things that excite you. You can’t do science without being curious. If you are working on problems that don’t really spark your fire, you’re not going to have enthusiasm for it. Last, but not least, you need to be able to see your future. I know that it may be difficult to look forward, but I think it’s important to understand where you are right now and be able to project towards the future. Somebody once said to me that one needs to have a ‘GPS for your life’ because, if you don’t, you can’t navigate and get to your destination. Even if you take the wrong path and end up on the rural gravel road with ditches and potholes, you’re still going to get there, even if it takes you a bit longer. This is possible if you have a ‘GPS or road map for life’.

One of the things that I’m really proud of, personally, is that, before I left Pietermaritzburg, I was told by a male scientist in my department that Stellenbosch is no place for a black woman. That is why, when I was offered this position, I signed the contract on principle. I was still thinking, ‘Should I go or not?’, but his words were more than enough motivation for me to go, even though I knew it might not be easy. Now, being in Stellenbosch, I am proud of the fact that I managed to establish a new research area in my department. Nobody was doing medicinal plant research at that time, in the exact area that I have made my speciality. This took establishing a new laboratory and a new research focus. Through this, I could build my national and international recognition.

But I don’t do what I do alone — I do it with a team of students. I am also extremely proud of all the students who have come along. They come from diverse environments and world perspectives, and they have enriched my life. Hopefully, I’ve continued to enrich their lives even after they obtained their degrees.

The awards I have received along the way of which I am proud are, for example, the NSTF Award for Young Researchers. I’m also really proud that I put together an application for and won a Fulbright scholarship. I was in the USA for almost a year, in very cold, snowy Minnesota, where I experienced blizzards, but I managed to grow my plants and complete my experiments at the university.

I would like to see more female scientists, and more black female scientists being retained in the system. We are certainly training enough. In fact, I think, in the field of biological sciences, we are not doing too badly. There is a lot of participation. However, I don’t know if people are entering into academic careers and beyond, and I think retention may a problem.

I’d like to see more women get into coding, spaces that are historically known and stereotypically thought to be male-dominated. I wish that these kinds of stereotypes could be broken. Diverse voices are needed from diverse places of creativity. Diversity builds strong communities, and I’d also like to see environments that are more enabling for different types of people across the board.

Women scientists often say, “I’m not able to publish as many papers as my male counterparts because I’m trying to look after my children”. In this time of lockdown, moms are saying, “I’ve had to take on online teaching for my children and responsibility for cleaning the house, but I still have an academic career as a top scientist.” So, in an ideal world, I would like to see spaces that better enable working mothers and women in general.

I’d like to see stereotypes dismantled and people being recognised as individuals with individual voices. That is quite important.

Finally, I’d like to see more scientific content on South African television, because we need to have our own pushing science, technology, engineering, and mathematics. Science has the power to change our world, which is why it needs to be accessible to all communities throughout South Africa. We need more such content on radio and television, so that younger people can think, ‘Oh! That could be a career path for me!’ We are losing talent because we as scientists are often hidden voices and hidden faces. We are not seen enough.

This website uses cookies to improve your experience while you navigate through the website. Out of these, the cookies that are categorized as necessary are stored on your browser as they are essential for the working of basic functionalities of the website. We also use third-party cookies that help us analyze and understand how you use this website. These cookies will be stored in your browser only with your consent. You also have the option to opt-out of these cookies. But opting out of some of these cookies may affect your browsing experience.
Necessary Always Enabled
Necessary cookies are absolutely essential for the website to function properly. These cookies ensure basic functionalities and security features of the website, anonymously.
Functional
Functional cookies help to perform certain functionalities like sharing the content of the website on social media platforms, collect feedbacks, and other third-party features.
Performance
Performance cookies are used to understand and analyze the key performance indexes of the website which helps in delivering a better user experience for the visitors.
Analytics
Analytical cookies are used to understand how visitors interact with the website. These cookies help provide information on metrics the number of visitors, bounce rate, traffic source, etc.
Advertisement
Advertisement cookies are used to provide visitors with relevant ads and marketing campaigns. These cookies track visitors across websites and collect information to provide customized ads.
Others
Other uncategorized cookies are those that are being analyzed and have not been classified into a category as yet.
SAVE & ACCEPT
error: Content is protected !!