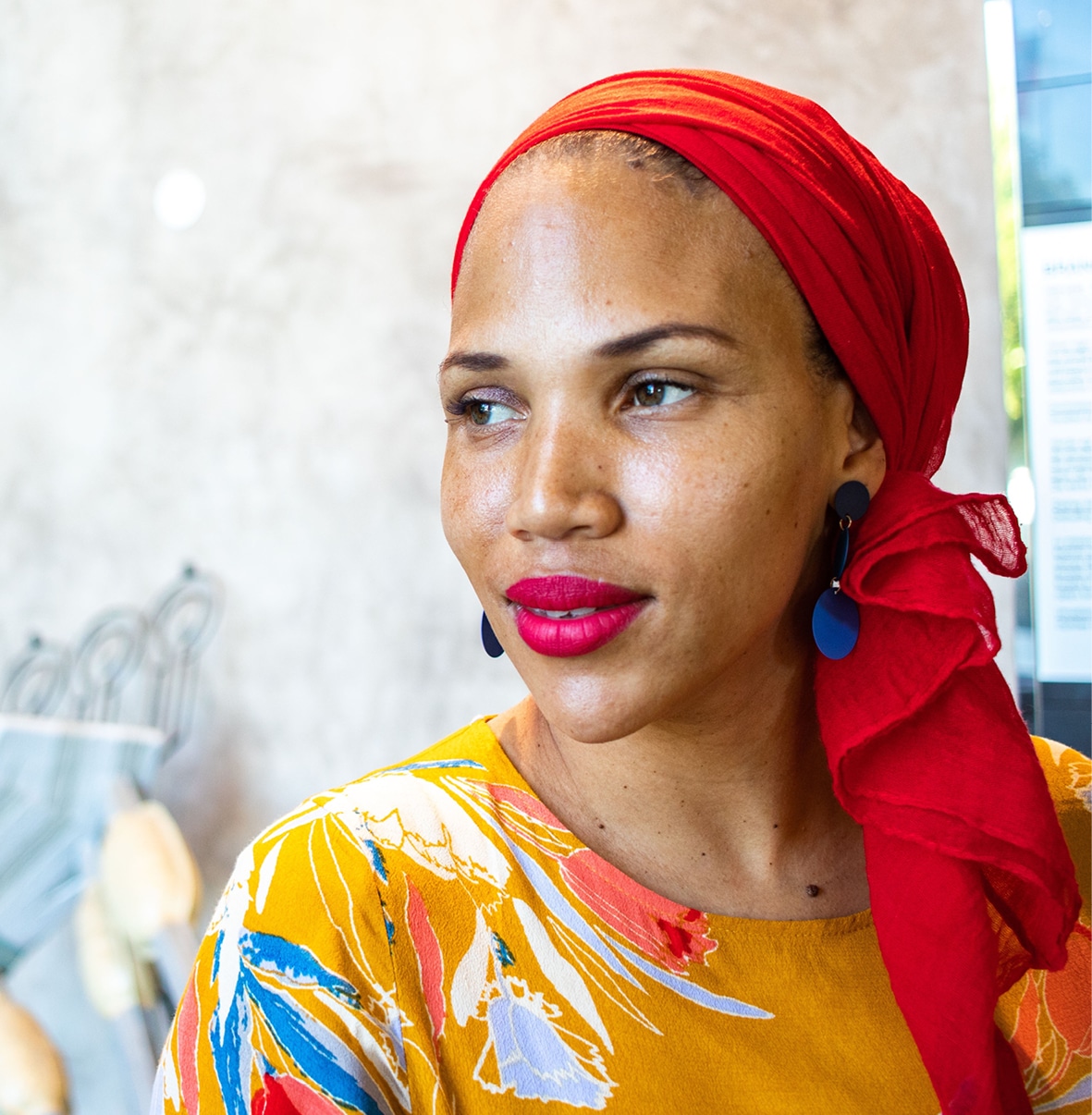 Rushana was an au pair who became a swimming instructor with a vision of establishing a swimming education centre where children and adults from all walks of life could learn essential life skills while enjoying the health benefits of swimming. She started her business in 2012 with no business skills and no swimming pool. Today, she holds an MBA from the University of Stellenbosch Business School. She has a successful business and offers classes to adults and children as young as 12 months.

My background is one with many crossroads. I’m from Mitchell’s Plain, and my brothers and I were never really brought up as ‘possibility’ thinkers. We never thought that what we saw around us was possible for ourselves. In fact, there weren’t many positive role models. We just didn’t grow up like that. I did very well at school — I worked very hard. I matriculated in 2001, and I was accepted to go to UCT. This was the first major crossroads in my life. I was so proud that I was accepted to study at this prestigious university, but, at the end of orientation week, I went to register, and the lady at the table said I did not have enough credits to do a bachelor’s in psychology, but enough to do a bachelor’s in social work.

I had to decide whether to do the bachelor’s in social work when I really wanted to do the BPsych. I thought about my two younger brothers at home and wondered how my parents were going to afford all of it. At the time, I didn’t think I could get a bursary or a part-time job to make it work. So, I went back home. It was one of the most difficult decisions, and I didn’t realise the impact it had on me at the time. All my friends went off to university and everyone was getting on with their lives. I enrolled at UNISA and took a few psych classes — I’m actually about ten credits away from getting my BPsych degree, but I just never finished it.

For a while, I couldn’t find work. I had no experience. I eventually became a nanny for a wealthy family in St James. I worked for them for three years before they appointed me as their au pair. I worked as an au pair for about five years before I took a baby for a swimming lesson, and that is when I fell in love with teaching swimming. I watched the swimming instructor interact with the six-month-old baby for the 30 minutes, and I was in absolute awe. After the session, I walked up to her and said, “I’m really interested in what you do, would you be able to train me as a swimming instructor?”, and she said, “Well, I’m actually putting out an ad this afternoon, so, if you are interested, can you come back on Monday?”

Two weeks later, I started as a swimming instructor. I worked for Ingrid for about five years before I told her I was going to start my own swim school. Ingrid was my first mentor, without me realising it. She taught me everything I know. We got along so well, and she would always tell me that I was destined for great things. In November 2011, my services were terminated, and I actively pursued my dream of starting a swim school that would serve my community in Mitchell’s Plain. I would get my mom to visualise having a swimming pool in her garden or hear swimmers laughing and kicking in her pool until she agreed to invest in my idea. I walked around for weeks telling community members that I was starting a swim school and that their kids would be able to learn to swim soon. By remortgaging my property and using the proceeds on the sale of a bakkie I had won in a competition, we built an indoors heated swimming pool, and opened the doors of Little Mermaids Swim School on 13 February 2012 with 35 swimmers registered.

In 2014, I joined the Small Business Academy Development Programme at USB. Before this, I only had matric, no undergraduate degree or anything.

When I started the swim school, my goal was to teach 100 children a week, and, after finishing the course, I had over 500 swimmers a week! Five months after completing the programme, I bought our first 23-seater bus to better serve the Mitchell’s Plain community and children who did not have transport. From there, we grew the business and staff complement. Finally, the growth mindset in me just bloomed. After making the connection with USB, the university would bring students to the swim school all the time. The students helped me look beyond the circumstances of the community in which the swim school existed, to see the abundance of resources available in the world. The students would look at my business in a very different way, a way that made me think of all the other possibilities for the swim school. It was often MBA students, and we collaborated often.

One day, I was working on my vision board and cut out the words From Small Business Academy to Master of Business Administration. I thought that this would be my journey, and here we are! — six years later with an MBA in the bag.

Because I have overcome so many challenges in establishing the swim school, these do not feel like challenges anymore, or at least not that heavy anymore. We have endured the terrible Cape Town drought, massive cash flow difficulties, and have had problems with chemicals in our pools, but I feel like what we are going through right now, with the COVID pandemic, is the worst challenge we have had to endure to date. It’s been five months of no income. I’m a planner, and I’d planned to own the land that the swimming school is on in Mitchell’s Plain by next year and develop it into a beautiful aquatic centre. Now, because of the pandemic, our plans have probably been delayed by another three years.

The first thing is to follow your passion. If there is something that has lit a fire inside you or a bug that has bitten you, there is nothing or no one that can stop you from achieving that. I don’t think I would ever have been as happy as I am if I hadn’t pursued what was in my heart and what was driving me to make a big difference in my community. Pursue the things that make you happy and base all your decisions on that, and do not doubt yourself! We always feel like we don’t belong or cannot achieve the things we begin. You enjoy what you do so much more when you believe in yourself.

In 2016, we were recognised by the Premier’s Entrepreneurship Recognition Awards. We won second place as the most innovative business in the Western Cape. I was very pregnant with my third child, and when we arrived at the CTICC on the night of the gala event, the host came up to me and said, “You look so beautiful. I have a wonderful surprise for you.” For the rest of that evening, I was blessed to sit next to the Premier at the time, Helen Zille, and at the same table as our current Premier, Allan Winde. When they called out my name and announced we had won second prize, I looked at my husband — he had this massive smile on this face.

Yes, the award was amazing, but just having him there and having him celebrate at that moment with me was so incredible, because he had made massive sacrifices for us to start and grow the business. He quit his job to help me in the business. He supported me doing the PGDip and the MBA after that. With every achievement, I am grateful that he is still by my side. I am also proud of being able to balance being a mother, wife, student, and business owner. Being able to achieve the MBA and still have everything else intact is something that I am proud of.

I wish that we all would take some time and reflect on our own internal or unconscious biases. We should challenge the biases we hold. When I speak to women in South Africa, I just want to say, ‘Stand your ground, know your worth, and work towards what you know you deserve, because we deserve greatness in this country.’ I wish for the self-awareness to know what we deserve. Women should know that they are worthy of so much.

Secondly, I wish for women to support other women and lift each other up, rather than competing against one another. We should rally around, support other women, and find ways that, when we get an opportunity to put forward a name for something, it is a woman’s name.

Lastly, know that your past does not define your future. You can do and be whatever you desire, now make it happen.

This website uses cookies to improve your experience while you navigate through the website. Out of these, the cookies that are categorized as necessary are stored on your browser as they are essential for the working of basic functionalities of the website. We also use third-party cookies that help us analyze and understand how you use this website. These cookies will be stored in your browser only with your consent. You also have the option to opt-out of these cookies. But opting out of some of these cookies may affect your browsing experience.
Necessary Always Enabled
Necessary cookies are absolutely essential for the website to function properly. These cookies ensure basic functionalities and security features of the website, anonymously.
Functional
Functional cookies help to perform certain functionalities like sharing the content of the website on social media platforms, collect feedbacks, and other third-party features.
Performance
Performance cookies are used to understand and analyze the key performance indexes of the website which helps in delivering a better user experience for the visitors.
Analytics
Analytical cookies are used to understand how visitors interact with the website. These cookies help provide information on metrics the number of visitors, bounce rate, traffic source, etc.
Advertisement
Advertisement cookies are used to provide visitors with relevant ads and marketing campaigns. These cookies track visitors across websites and collect information to provide customized ads.
Others
Other uncategorized cookies are those that are being analyzed and have not been classified into a category as yet.
SAVE & ACCEPT
error: Content is protected !!